PLEASANTON, CALIF., NANJING, CHINA, June 3, 2021-—IASO Biotherapeutics (IASO Bio), and Innovent Biologics, Inc. (Innovent, HKEX: 01801), today jointly announced that the results of initial clinical studies on treatment of relapsed or refractory multiple myeloma (R/R MM）in subjects using fully human BCMA-targeting CAR (CT103A), an investigational chimeric antigen receptor (CAR) T-cell therapy co-developed by IASO Bio and Innovent (IASO Bio: CT103A, Innovent: IBI326) was published in “Blood”, a peer-reviewed medical journal specializing in hematology. The name of the article is “A phase 1 study of a novel fully human BCMA-targeting CAR (CT103A) in patients with relapsed/refractory multiple myeloma.”  The editors of “Blood” were so impressed by the unique persistence of CT103A and the authors’ exposition on the re-treatment prospects of the disease during the studies that they invited experts from University College London Cancer Institute to write a review entitled “BCMA CARs in multiple myeloma : room for more” (DOI 10.1182/blood.2021010833). 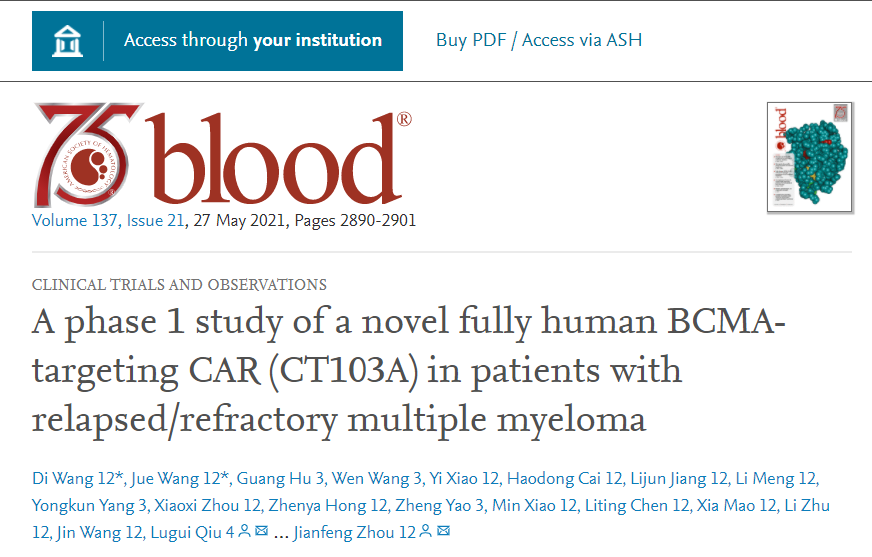 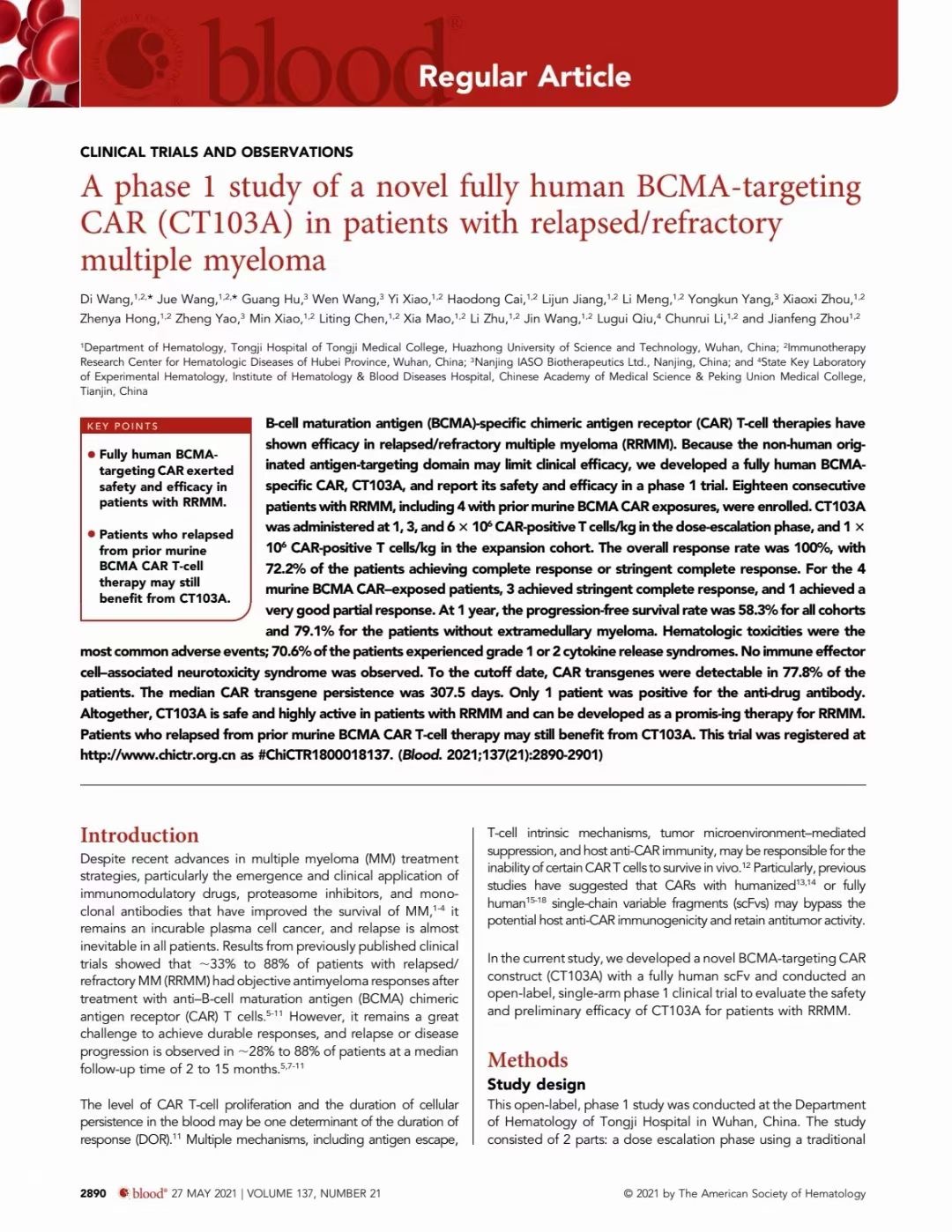 Despite recent advances in multiple myeloma (MM) treatment strategies, particularly the emergence and clinical application of immunomodulatory drugs, proteasome inhibitors, and monoclonal antibodies that have improved the survival of MM, it remains an incurable plasma cell cancer, and relapse is almost inevitable in all patients. Results from previously published clinical trials showed that; 33% to 88% of patients with relapsed/ refractory MM (R/R MM) had objective antimyeloma responses after treatment with anti–B-cell maturation antigen (BCMA) chimeric antigen receptor (CAR) T cells 1-7. However, it remains a great challenge to achieve durable responses, and relapse or disease progression is observed in 28% to 88% of patients at a median follow-up time of 2 to 15 months 1-7.

The clinical study published in “Blood” was conducted in Department of Hematology, Tongji Medical College of HUST in China (ChiCTR1800018137). The results showed CT103A has favorable safety profile with mild and controllable cytokine release syndrome (CRS). CT103A shows excellent expansion and longer persistence during transfusion. In addition, subjects relapsed from a prior murine BCMA CAR-T treatment were also benefited from CT103A.

CT103A is highly active and induces quick and durable responses in subjects with R/R MM. The ORR was 100% for all patients (18 of 18), with enhanced responses over time, and 72% (13 of 18) of the patients achieved complete response (CR) or stringent complete response (sCR). All patients evaluated for minimal residual disease (MRD, 17 of 17) in the bone marrow were MRD-negative at 10-4 nucleated cells by flow cytometry within 1 month; 9 of them were tested by next generation sequencing, and 4 patients achieved the best responses of MRD negativity by the level of 10-6 nucleated cells over time. The PFS and OS rate at 1 year were 58.3% and 75%, respectively. 1 year PFS rate was 79.1% for subjects without extramedullary myeloma (EMM). The patient with longest follow-up maintains sCR for over 2 years.

This study enrolled 4 patients who had previously been treated with a murine BCMA CAR For the 4 murine BCMA CAR–exposed patients. 3 achieved sCR, and 1 achieved a very good partial response (VGPR).

Safety: No Immune effector cell-associated neurotoxicity syndrome (ICANS) was observed in any of the dose groups. CRS was observed from 94% of the subjects, and there was a comparatively high rate of severe CRS (28% grade 3; 13% would have had grade 3 if the highest dose had been excluded). In dose expansion study, investigator recommended 1X106/kg CAR+ T cells as recommended Phase II dose.

CAR T-cell expansion: According to ddPCR-based CAR transgene quantification, the median time to reach peak concentration after infusion was 12 days (range, 7-26 days), a strong indication of rapid CAR expansion. No significant difference was observed among 3 dosing groups. For the 4 patients who had participated in prior murine BCMA CAR T-cell trials, low levels of expansions of previously infused murine CAR T cells were observed with short durations compared with CT103A, indicating that the therapeutic response should mainly be attributed to CT103A expansion.

Immunogenicity: ADA was tested in all 18 subjects and two samples of one subject were validated as positive for ADA.

Comments on the “Blood” article

In the article, 3 experts from University College London (UCL) Cancer Institute, Lydia Sarah, Hui Lee and Kwee L. Yong commented on the CT103A studies. “Wang et al describe clinical outcomes that we have come to expect in the field today and include sufficient details on their trial protocol and subject cohort to allow considered comparison with other trials globally. The authors are candid in their assessment of the trial, and they discuss the possible impact of their comparatively treatment-naive cohort and their lymphodepletion regimen (combining fludarabine with high-dose cyclophosphamide) on response, toxicity, and CAR persistence. Even so, the study is noteworthy for the duration of CAR persistence and its inclusion of subjects previously treated with a murine BCMA CAR.”

They also mentioned that both points are significant because it is well known that CARs targeting CD19 in acute lymphocytic leukemia (ALL) can maintain durable responses in 40% of subjects despite therapy being given for refractory disease and multiple relapses 8. However, even with initial disease regression, durable responses with CAR T cells have not been achieved in MM 9-11. In the first 2 BCMA CAR trials reported, subjects had a median PFS of 1 year. Although the outcomes reported in the CARTITUDE-1 trial were better, it is still not clear whether prolonged remissions can be obtained with existing CAR T-cell products in MM.

The experts subsequently noted and affirmed the in vivo persistence of CT103A. They compared the clinical trial data for CT103 and 2 other CAR-T drugs launched in the market. “In trials assessing the earliest BCMA CARs, bb2121 and LCAR-B38M/JNJ-4528, persistence was typically 6 months. Given this landscape, the reported persistence of CT103 is notable. The maximum concentration of circulating CT103 is lower than other CARs, but it has a median persistence of 308 days, which will likely increase with follow-up. Robust expansion was seen in all subjects, and at last follow-up (median, 13 months), CAR T cells had fallen below 1 X 102 copies per mg of DNA in only 5 subjects.”

In addition to relatively high persistence, the experts also noted relative low binding affinity (10 nM) of CT103. “Another unusual feature of CT103 is its relatively low binding affinity (10 nM), which the authors have usefully compared with that of bb2121. CT103 has a slower on-rate, and both binders have similarly fast off-rates compared with the CD19 binder in tisagenlecleucel and axicabtagene ciloleucel (ie, FMC63). The association between binding affinity and clinical outcomes is still uncertain and is likely to be target and context dependent. In CD19, a lower-affinity CAR has been associated with improved persistence in pediatric ALL in which the authors postulated that a faster off-rate may facilitate serial triggering. More work is needed to define the binding kinetics that may influence the efficacy of BCMA CARs.”

The experts from UCL Cancer Institute ended with positive remarks and optimism on the persistence of CT103 and its treatment of MM, “More widely, we are witnessing rapid developments in MM CAR T-cell therapy. We await maturity of promising but early data from an increasing number of MM CARs jostling for a spot on the global landscape, some of which may achieve persistence to rival CT10313. CT103 thus enters a rather crowded field but is a welcome addition for its report of increased persistence and contribution to the discussion surrounding the prospect of retreatment.”

CT103A is an innovative therapy co-developed by IASO Bio and Innovent. Previous studies indicate subjects with relapsed/refractory multiple myeloma (RRMM) who received high-dose BCMA-targeting CAR-T cells may achieve better remission but have worse adverse events. Moreover, once the disease progresses again, the re-infusion of CAR-T cells will not be effective. To solve this dilemma, CT103A has been developed, a lentiviral vector containing a CAR structure with a fully human scFv, CD8a hinger and transmembrane, 4-1BB co-stimulatory and CD3ζ activation domains. Based on strict selection and screening, utilizing a proprietary in-house optimization platform, the construct of the BCMA CAR-T is potent and persistent. In February 2021, CT103A was granted breakthrough therapy designation by the NMPA for the treatment of relapsed/refractory multiple myeloma.

Inspired by the spirit of "Start with Integrity, Succeed through Action,” Innovent’s mission is to develop, manufacture and commercialize high-quality biopharmaceutical products that are affordable to ordinary people. Established in 2011, Innovent is committed to developing, manufacturing and commercializing high-quality innovative medicines for the treatment of cancer, autoimmune, metabolic and other major diseases. On October 31, 2018, Innovent was listed on the Main Board of the Stock Exchange of Hong Kong Limited with the stock code: 01801.HK.

Since its inception, Innovent has developed a fully integrated multi-functional platform which includes R&D, CMC (Chemistry, Manufacturing, and Controls), clinical development and commercialization capabilities. Leveraging the platform, the company has built a robust pipeline of 24 valuable assets in the fields of cancer, metabolic, autoimmune disease and other major therapeutic areas, with 4 products – TYVYT® (sintilimab injection), BYVASDA® (bevacizumab biosimilar injection), SULINNO® (adalimumab biosimilar injection) and HALPRYZA® (rituximab biosimilar injection) – officially approved for marketing in China, sintilimab’s Biologics License Application (BLA) acceptance in the U.S. , 6 assets in Phase 3 or pivotal clinical trials, and an additional 14 molecules in clinical trials. In 2019, TYVYT® was the first PD-1 inhibitor included in the National Reimbursement Drug List (NRDL) and the only PD-1 inhibitor included in the NRDL in that year.

Innovent has built an international team with advanced talent in high-end biological drug development and commercialization, including many global experts. The company has also entered into strategic collaborations with Eli Lilly and Company, Adimab, Incyte, MD Anderson Cancer Center, Hanmi and other international partners. Innovent strives to work with many collaborators to help advance China’s biopharmaceutical industry, improve drug availability and enhance the quality of the patients’ lives. For more information, please visit: www.innoventbio.com.